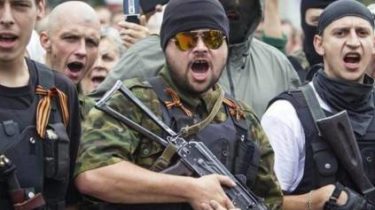 Saturday, 10 June, Pro-Russian militants in the Donbas 31 times opened fire on Ukrainian military, the most difficult situation is in the southern sector of the front. As a result of shelling, two soldiers of the ATO forces were injured.

On the seaside direction nearly half the attacks – 15. Militants from barreled artillery caliber of 122 mm and 120-mm mortars fired strongholds of Ukrainian armed forces near Krasnogorovka. Several artillery shells hit boyeviki in residential areas of the village, but there were no casualties among the local population and destruction.

Gunmen Rob convenience stores and fight with the shooting – exploration

Also the strengthening of the APU in the area Krasnogorovka, Marinka, Glorious and Carmalita came under enemy fire from 82-mm mortars. moreover, near Chermalyk recorded at least two cases applying the Pro-Russian separatists portable versions of reactive systems of volley fire. To Pavlopol and Water fighters several times shot from grenade launchers and small arms.

On Donetsk the direction fighters from mortars of a caliber of 120 mm shelled strongholds of the AFU near Avdeevka and Verhneuralskogo. Ibid., and also near Luhansk, Zaytsevy and Kamenka, the separatists have repeatedly hit the positions of the ATO forces from grenade launchers and small arms of various calibres.

At the direction of Lugansk recorded the fewest attacks by militants. Separatists from 82-mm mortars fired at military positions near krymske. Other violations recorded in the area of Stanytsia Luhanska, Valuyskiy, the Trinity and the Donets, where fighters opened fire with small arms and grenade launchers of various modifications.