The militants preparing to attack, in a village in Luhansk region, military equipment being moved – 93rd Ombre 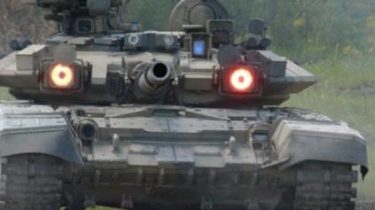 Militants in the Luhansk region transferred to the occupied village of Donetsk tanks and infantry fighting vehicles.

This was reported in the press center of the 93rd Ombre.

“In the town of Donetsk were included armored vehicles of terrorists composed of at least 2 tanks and 6 APCS and few vehicles”, – stated in the message.

According to the military, such actions represent the attempt of the enemy to raise the degree of confrontation and preparations for the re-attack on the positions of the Ukrainian defenders.

In addition, it is noted that from 19:10 hrs June 10 till 1:25 h June 11, the terrorists fired a massive fire on positions of the Ukrainian defenders near settlements Crimean and Novotoshkivske.

“Ignoring the requirements of the Minsk agreements, the enemy was heavy fire from large-caliber 152-mm and 122-mm artillery, 120-mm and 82-mm mortars, BMP-1, heavy anti-tank and automatic grenade launchers SPG-9 and AGS-17, heavy machine guns and small arms”, – told in the 93rd Ombre, stressing that the militants are shelling the occupied settlements of Frunze, Kirovsk, Smiley and Donetsk.

In turn, units of the 93rd Ombre, holding positions, return fire was not opened.

We will remind, for last days fighters 73 times hit the positions of the Ukrainian armed forces. Four soldiers were killed and another seven soldiers were wounded.