Unique Church-tomb, and the estate of the family von Meck: the Kyiv joined the project #SOSfuture 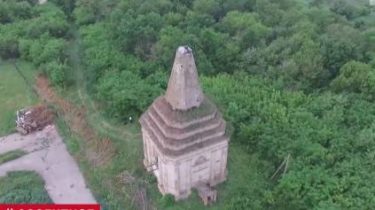 In Kiev activists gathered diplomats and city authorities to empty the bowl of an abandoned swimming pool “Chaika”, where for 20 years hosted mostly drug addicts and the homeless. This object appeared on the map of the Internet project to save the monuments for the future, and even attracted the attention, according to a story TSN.19:30.

In addition to the pool, in the Kyiv region has other attractions, marked by the hashtag #SOSfuture. For example, the Church-tomb Podgorski in the village of Antonov, which for 200 years. The building survived the Soviet era only because there was a focus on the military maps. The temple was a warehouse of tractor spare parts, and from the tomb threw the remains of the Polish gentry have kept the collective potatoes. Already at independence, the local entrepreneur was raised in the construction field mushrooms, and a few years ago, everything was removed, the Church was granted the status of monument of local importance, but no protection has not put the building disfigured the treasure seekers and banal thieves of building materials. The Church haven’t seen repairs, and the prospects are vague, because the building still does not have the owner – so to fix it just no one.