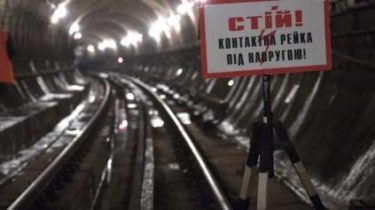 In the evening, June 16 in Kyiv at the metro station “Leo Tolstoy” there was a traffic accident: a man fell under a train.

About it from a place of events the correspondent of TSN.ia.

Because of this, the station “Leo Tolstoy” was closed.

Later, the Kiev metro has confirmed this information. Because of the fall of man on the track was closed metro station and transplantation. Subsequently, the victim was taken away by ambulance and now the blue line metro is in normal mode.

We will remind, on June 8, the man at the metro station “Akademgorodok” committed suicide. The victim is a resident of Kiev born in 1993. The man went to the station together with relatives and while they were buying tokens, descended to the platform. As told by the motorman, when the train arrived to the station, the man jumped in the way.