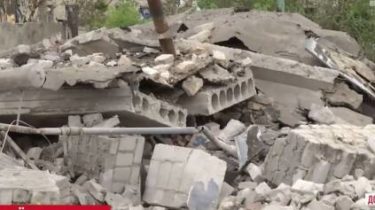 Every evening the enemy aktiviziruyutsya near the industrial zone of the Town. There the defenders and the invaders is shared by only tens of meters, said in the story TSN.19:30.

The military said that at times they even do not appear outside of hiding, because the enemy is very close. “All the time in the building,” says a fighter named “Max”. Heaven he and his teammates can be seen through the holes from the shells in the walls and ceiling of the structure. It is the only shelter from the enemy, which is less than a hundred meters. “Once again climbs. Wall break good anti – tank gun works, it pierces the wall quietly,” says the soldier.

And more powerful weapons: the soldiers witnessed how it destroyed one hut. “Was the house – no house. I don’t know what it was, but got well,” says one of the defenders of the Town. Comforting military only the absence of wounded from this attack of the enemy.

However, the sad news came from the rear – there in the hospital died a sapper company commander Eugene sarnavskiy with the call sign “Eugene”, which is more than a week ago blown up with explosives. “The officer who for three years was in the war which was a war, saved a lot of guys taking a lot of mines”, – is sad the soldier with the Callsign “Bakhmat”. Fellow called “Eugene” the commander and person – in their opinion, on such officers should build an army.