In Kiev, the parrot monk “illegally immigrated” to the U.S. Embassy 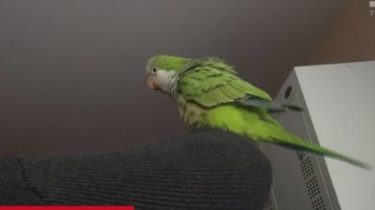 The capital lost a green parrot. The bird found a new home at the Embassy of the United States, according to a story TSN.19:30.

Illegal is 40 cm tall and has a good appetite – the Embassy staff feed visitor without documents Apple. The parrot feels at the Embassy, like at home. “It’s easy to go to the people, the head goes down,” say the employees of the institution. The Embassy doesn’t know the name of a bird, but found out his breed: parrot monk. Interestingly, such a view for US more than for Ukraine.

Video settings the capital has lost a green parrot, and the new shelter found at the U.S. Embassy

About stray parrot employees of the Embassy wrote in social networks – he’s already received hundreds of likes and shares, but the owner is still not found. The mission is already making plans for the bird. “We are going to teach English if the owner is not there,” they say.

Recently in Kiev there were other interesting history with animals. Thus, on 8 June, after weeks of searching I found a squirrelwho has disappeared from the apartment on the sixth floor. And the very next day in one of the residential areas have noticed the moose. The wounded animal went to rescue a special group, but the animal took to their heels and crossed the Dnieper.