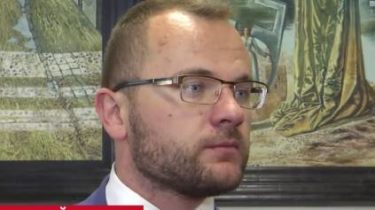 Secretary of the city Council of Lutsk Igor Polishchuk said about the attempt of the political violence over him through the courts. So he interprets the decision about the necessity of his appointment, another person, and criminal proceedings against him and the threat of arrest, according to a story TSN.19:30.

A judicial decision on the post of Secretary of the city Council restored the predecessor Julia Bosenko that the deputies fired and was re-elected Chairman Polishchuk. He does not understand, as he should appoint to the position of another person. “In the day when you were made full text of the decision, it is unknown under what circumstances somewhere in the night or late in the evening from the court’s decision thrown out two paragraphs under the guise of technical amendments. Which, in fact, changed the essence of the solution,” says Polishchuk.

The judge argues that it is really about a technical error. “It happened, but this code provides – I just fixed the errors in the reasoning part, does the decision have not changed,” says Valentine, Pushkaruk. But Polishchuk said that he was obliged to reinstate a colleague immediately, but how to do it – not explained. Therefore, to implement the decision of the court of session had convened the city Council, however, the deputies for Vasenko voices are not given. So now Polishchuk said about the pressure on him. “If I, as Secretary, will issue an order on the resumption Usenko at work, then it is a criminal offence, it’s an abuse of power and official authority”, – he said.

The criminal proceedings against him is still open – at the request of his predecessor. It just requires that Polishchuk immediately fulfilled the court’s decision and reinstated her in the position. “The time for voluntary execution. If such a decision is not executed, then the person will be subject to criminal liability”, – said the lawyer of Yulia, Oksana Vasenko Komarnicki. In support Polishchuk became local deputies, who called the case political pressure. They emphasize that criminal liability for one person is impossible, because the defendant in court was the city Council as a whole.