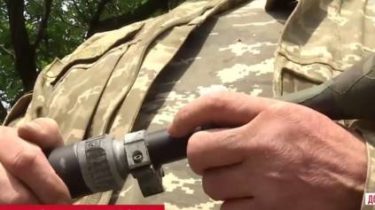 The village of Novoluganskoe in the Donetsk region is becoming a new hot spot on the map of the ATO. The former “grey zone” came under the control of the Ukrainian army in the end of 2016, given the need to block the way of smuggling, according to a story TSN.19:30.

Strongholds and checkpoints blocked the road for trucks, which previously shuttled between government-controlled and Pro-Russian terrorists in the occupied territory. Now there is a toll for cars is prohibited. Since then, the occupants shoot mainly small caliber, but almost every day, and sometimes add to the usual Arsenal of more powerful weapons. The other day on Ukrainian territory, hitting a tank – only thanks to lightning fast response the military has done without victims.

Local military without pathos state: to prevent “dvojcata and transotic” helps already considerable combat experience. Fighters “Aydar” fight more in 2014 and are taught the intricacies of this business recruits. One of the relics of the position of the optical sight “Cech”, the legendary commander of the “Cold Yar” Eugene Wojciechowski, who was killed at the head of the reconnaissance group in Happiness. Now the gun is owned by the fighter with a call sign of “Good”. “Regional ataman Oleg Ostrovsky handed it to me. A wonderful thing,” he says. On the sight there are 11 cuts that put the “Czech”, after his death, they are not drawing. The soldiers say that Wojciechowski meant only a dead Russian officers – simple terrorists, he was not considered.

As reported recently Novoluganskoe it was in the sight of illegal armed formations in the zone of the ATO. The Ukrainian military night fired at from grenade launchers and infantry fighting vehicles. Heavy caliber was not used but the density of fire was such that from the shelter it was impossible to stick his head. The military has determined that the enemy fired from LNG and BMP, and when the fire was particularly dense and annoying – requested permission of the commanders response.