In Kiev twice the increase rate of the houses: what does it mean and how much will have to pay 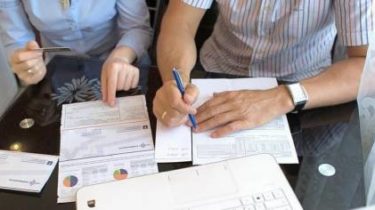 Increased 1.5-2 times the tariffs on services on maintenance of houses, constructions and house adjoining territories will introduce in Kiev on 1 July, and therefore bills the people of Kiev will receive in August.

This at a press briefing on 17 June, the Deputy Chairman of the KCSA Petr Panteleyev, reports UNIAN.

Utility test: in the Kiev house 5 days live without gas and water

He also added that in the past two years the city authorities had received treatment utilities that perform functions in the maintenance of houses and house adjoining territories, with a request to adjust the rates.

According to Panteleyev, the government has long refused to companies, realizing that there is a limit to the solvency of the people for an increase in tariffs for other communal services, particularly heating, hot water, electricity and the like.

“Now the situation more or less stabilized, and we are forced to go to higher order to ensure stable operation of the enterprises”, – said the Deputy Chairman of the KSCA. Panteleyev added that increase of tariffs will not only save the state of the industry’s workers, but also to improve the quality of cleaning services. He noted that there are preferential schemes of calculation: in the case of payment before the 20th day there is a preferential rate that is below 10%.

Videochallenge will pay more for the work of public plumbers, electricians and janitors

Advisor to the first Deputy Chairman of Kyiv city state administration on issues of pricing Basil Yastrubinsky, in turn, drew attention to the fact that commercial companies that serve residential homes and provide similar services, gradually raise tariffs, some of them are already about 10 UAH per 1 sq m, and the utilities the last 4 years only now received permission to increase them.

As explained Panteleev, fares were raised, because there were failures with the payment of utility services for heating and hot water, and adjustment of tariffs for cleaning caused the indignation of the people.

Poroshenko began personnel cleanings in the national Commission, which is responsible for utility rates

According to Yastrubinskogo, in Kiev, more than 11 thousand homes housing stock. Now the government has approved the tariffs for 8327 houses which are in municipal ownership (the rest of the house – another form of ownership). He reported that for 63 homes fare to 3 UAH remains.

“This is usually the home where services are minimal, because either the former barracks or small houses with no elevators and the local area, and in some cases practically and communications,” added Yastrubinsky.

How to get money for communal savings on your card

“Most of the homes in the us falls in the interval from 5 to 6-7 UAH. It is almost 72% of homes. 7 to 8 UAH rate will have a total of 600 homes. And there are several houses is a 95 – where the rate ranges from 8 UAH. It is, as a rule, dormitories, because there are very large costs, or homes that are left out of the scheme maintenance costs. That is the bulk of rates fell from 5 to 7 UAH. And the average tariff 5 UAH 85 kopecks – that is, if to pay up to 20 th. Who is going to pay later those rates will be above 10%,” – said the adviser.

Recall that the level of timely payment for utility services in Ukraine for the first quarter of this year is 85.3%. In the first three months for housing services counted 33.5 billion UAH, and the population paid 28.6 billion UAH.