The cult Scooter rides in the occupied Crimea concert: how outraged German politicians 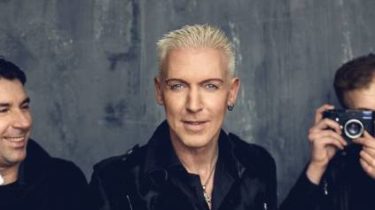 “Inconceivable: a group is going to perform in Balaklava, a small town in Russia annexed the Crimean Peninsula”, – the German tabloid Bild has formulated his lack of understanding concerning scheduled performances in the Crimea one of the most famous music bands who performs electronic dance music. Scooter – the only foreign performer in the music festival program ZBFest-2017.

In addition to the German band on the bill provided by the Russian participants: the singer Dima Bilan, group “Earring”, “Brigade s”, “C”, L One, “Leningrad”.

The festival under the open sky “Zolotaya Balka” will hold on 4th and 5th August in the valley of vineyards located between Balaklava in the South-West coast of the Crimea and Sevastopol. The performance of the Scooter is planned for August 4th.

Misunderstanding popular German tabloid is due to the fact that the Crimea, according to the UN resolution, is considered a Ukrainian territory, which is illegal annexed by Russia.

The UN resolution of March 27, 2014 confirms the territorial integrity of Ukraine and urges to refrain from any actions and contacts that are directly or indirectly recognize the change of status of Crimea.

Scandalous Panin on the prohibition of entry to Ukraine: Probably fear for their dogs

Ukrainian law allows foreigners entry to the temporarily occupied territory with a special permit and only from the continental part of Ukraine. According to Bild, which refers to the management of Scooter, the musicians will fly in August in Crimea via Moscow.

The German newspaper quotes the Deputy Prosecutor General of Ukraine Eugenia Enina, who explained that for such an offence are punished with imprisonment up to eight years.

In Ukraine continues the investigation against the foreigners who illegally visited the Crimea. German politician Rebecca harms (Rebecca Harms), in the European Parliament representing the Green party and, in particular, actively protects the rights of the Crimean Tatars, reacted to the plans Scooter indignantly.

Videomusica singer Yulia Samoylova will be again in the annexed Crimea

The group, “apparently, doesn’t care what Crimea was illegally seized by Russian troops,” – said harms. According to her, agreeing to speak on the Peninsula, musicians “are on the side of Putin.”

The musicians and management of the Scooter did not expect criticism for this tour. Bild quoted singer H. P. Baxter (H. P. Baxxter) who assured that they were going to the Crimea “not to engage in politics, because there they have a lot of supporters.”

The team Manager Jens Body (Jens Thele) added that none of the organizers of the trip could not think what it could lead to political conflict. In the words of astonishment, really, is somewhat different.

The festival in the Crimea is not listed in the summer of Scooter on their official Facebook page. But appears on the band’s website without specifying the country in which is located a Balaclava.

All other overseas performances in this list are specified with the cities and with the countries where the concerts will be held. It is unlikely that the musicians with Scooter not heard anything about strained relations between Russia and Ukraine, and the West’s position on the annexation of the Peninsula.

Among the recent scandals, the status of the Crimea the most notorious occurred on the eve of “Eurovision” in Kiev. Ukraine bans entry to Russian participants of Yulia Samoilova, who acted in the Crimea, having driven there from Russia.

In response Russia has refused to participate and broadcast the song contest. Even if H. P. Baxter and his Manager have not heard anything about Julia Samoylova, they could assume that they are trying to be apolitical in a politically highly tense context is unconvincing.

The representative of Germany at the “Eurovision-2017” Levin for the question DW, she would go to the Crimea for the festival, said that at first thought and weighed all the pros and cons.

53-year-old H. P. Baxter claims that the Scooter does not mix culture and politics. Perhaps he does not want to objectively assess the reality? The foreign policy expert of the CDU/CSU in the Bundestag Karl-Georg Wellmann (Karl-Georg Wellmann) has called this vision “naive illusion”.

“The group creates its own unnecessary complexity, in opposition to the common position of the West regarding Crimea, – the politician said in an interview with DW. – Of course, their performance is used for the purpose of propaganda.

Musicians must realize that they thus do not help neither the Ukrainians, nor the people who live in the Crimea.”