During the “equality March” in Kiev, two policemen were injured 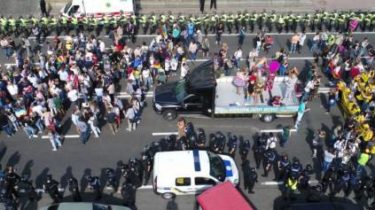 During the protection of the “equality March”, which was held on Sunday, June 18, in the center of Kiev, slight injuries were got by two police officers. This was during the briefing said the Deputy Chairman of the national police of Ukraine Andriy kryschenko.

“Asked for help by two police officers, but it is small scratches, no hospitalization, – quotes its words “Interfax-Ukraine”. – The organizers and participants of the action “Kievprayd” there were no injuries. All have departed. In those places where they came, were strengthened outfits (police)”.

According to Krishchenko, only six people were detained, who are currently in the Shevchenko district Department of research of the national police of Ukraine in Kiev. In addition, police seized several balaclavas, pyrotechnics, and medical masks.

However, he noted that the protection of public order in Kiev on Sunday will be in emergency mode actually until the evening.

Recall that in the “equality March” in Kiev was attended by 2,500 participants. Even before the event, the opponents of LGBT people came out to protest. Subsequently began the first clashes , police seized the protesters with balaclavas, gas canisters, some had even eggs. Because of the threat of the marchers had to change the route.