In the “March of equality” police detained six of the protesters: they have taken to the site 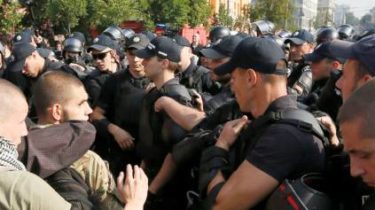 The LGBT marchers had already left the town centre, undercover police, they went down into the subway. At the same time, protesters continued clashes with police.

So, the collision occurred near the red building of Shevchenko University, first detained three people. The police tried to remove them at the moment, but protesters tried to get in the ring.

Now police say six, and representatives of “Right sector” – about 10 detainees, reports the correspondent of TSN.

On the website of national police of Kiev as of 11:00 reported that detainees for offenses during this event was not.

However, as of 11:10 said that the detained six people.

“Six people who tried to break through the border police, taken to the police station to find out their details and provide a legal qualification to their actions”, – militiamen noted.

At the same time, the head of the Kiev city organization “Right sector” Vladimir Zagazey reports that 10 detainees.

Recall that in the “equality March” in Kiev was attended by 2,500 participants. Even before the event, the opponents of LGBT people came out to protest. Subsequently began the first clashes, police seized protesters with balaclavas, gas canisters, some had even eggs. Because of the threat of the marchers had to change the route.