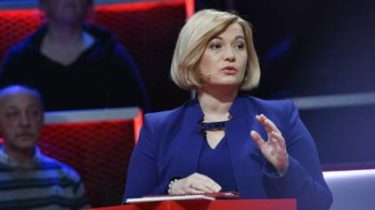 Soon will be finalized the draft law on de-occupation and reintegration of Donbas, after which there will be a meeting of the NSDC.

This was announced on his page in Facebook, the representative of Ukraine in the humanitarian sub-group Irina Gerashchenko.

“Today we worked a few hours, remove certain controversial points of the draft law “On peculiarities of state policy on restoration of state sovereignty of Ukraine on the temporarily occupied territory of Donetsk and Lugansk regions of Ukraine”. In the near future will be the national security Council, which will review the bill and make a final decision, I also proposed in the near future for a debate on the bill on the informal Minsk platform, which is created and successfully works in the Parliament,” she said.

According to Gerashchenko, the essence of the bill is that “Ukraine remains committed to a political and diplomatic solution to the war in the Donbass, instigated by Russia, while we are fighting for de-occupation and return of territories”.

Separately, the politician also complained that the faction “Samopomich” does not work in the framework of the Minsk platform.

We will remind, on June 13, Turchynov said that Ukraine needs to complete anti-terrorist operation and to move to a new format to protect the country from the hybrid war with Russia.