Trump seriously prepares to determine the fate of Donbass browser 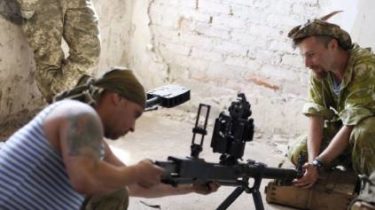 The meeting of the presidents of Ukraine and the USA Petro Poroshenko and Donald trump may bring a new format that will allow Kiev to regain control of the East, and Moscow to save face during an exit from the Donbass, says columnist Sergei Rudenko.

The US President decided to meet with the President of Ukraine earlier than with the Russian head of state. With Vladimir Putin, the White house will hold important talks in July, during the summit of the Big twenty in Hamburg.

This is an important caveat for the future of Ukraine, namely, to resolve those conflicts, which has to do with Russia in the Donbas and in the Crimea. It is not excluded that the meeting Poroshenko with trump will have a significant impact on further developments.

Before the meeting of Ukrainian and American presidents almost simultaneously in Kiev and Washington were two important statements. Secretary of the NSDC of Ukraine Oleksandr Turchynov announced the intention of the Ukrainian authorities to “do away” with the ATO in the Donbass, leaving the conflict in the East of the country a different status. And U.S. Secretary of state Rex Tillerson did not rule out that Ukraine and Russia can find a solution on the outside Donbas in Minsk format.

This means that in the situation in the East of Ukraine may soon receive a new solution. In fact, Turchinov articulated what has long been saying in Ukraine: the wording “anti-terrorist operation” is absurd, because in Donbass there is a war.

The refusal of the ATO means that Ukraine will be forced at the legislative level to fix that in the country, the war continues. With all the resulting consequences, with the likely introduction of martial law, at least in certain districts of Donetsk and Luhansk regions, with the mobilization of reservists and probable military solution to the conflict in the East of the country. And the Secretary of state has made clear: Washington does not matter, on the basis of what arrangements will be allowed the conflict in the Donbas.

The white house is ready to support any plan that will lead to a positive result.

Rex Tillerson firmly articulated the position of the new US administration: they don’t want to be “handcuffed” to the Minsk agreements. Of course, he could also add that the keys to these handcuffs are in the pocket of Vladimir Putin, because it would be a truth known to all – and Trump, and Poroshenko, and the master of the Kremlin.

Vladimir Putin, who plans to meet with Donald trump on 7-8 July in Hamburg, continues to demonstrate calm.

In a recent interview with Oliver stone, he accused the US of supporting violent seizure of power in Ukraine. And June 15 during the “straight line” without the slightest hesitation, said that U.S. sanctions against Russia introduced “from scratch”.

Like, if it were not for Crimea or Donbass, Washington still would have found an excuse to weaken Russia. The Russian President continues to feel full-fledged master of the situation in the East and South of Ukraine. He understands that it is from his will depends the future of the Crimea, and Donbass. Moreover, the master of the Kremlin sends a clear message: he is ready to negotiate with Washington.

The failure of the “Norman” and “Minsk” process suggests that Putin has offered a price too low for Ukraine. Now Mr Putin is already talking about possible participation in the negotiations in Washington. Whether Moscow is ready now to make concessions in the question of the future of Donbass and Crimea? Possible. After all, as Putin would not have tried to demonstrate PEP, economic sanctions are painful for Russia.

It is possible that the master of the Kremlin is ready to abandon the Donbass, the only question is – how, when and on what conditions. “Norman” and “Minsk” formats was an attempt to determine these conditions.

Trump’s meeting with Poroshenko will give the White house a full view of how she sees the future of Donbass and Crimea, the official Kiev.

Turchinov statement of the need to complete the ATO, obviously, and is part of the new plan. His goal is to liberate the occupied territories. For this purpose in Parliament will be submitted draft law “On restoration of state sovereignty of Ukraine on the temporarily occupied territories of Donetsk and Lugansk regions”.

Kiev, regardless of the outcome of the negotiations, prepares the plan for the return of Donbass under their control. Obviously, “Minsk” and “Norman” formats can very quickly be history. They allowed Ukraine to stop Russian aggression and to bring the problem to the attention of the international community, but, unfortunately, are unable to decide the future of Donbass.

It is not excluded that after the meeting with trump Poroshenko will be a trilateral format Ukraine-Russia-USA. For Petro Poroshenko, it is now important to support the U.S. in conflict with Russia.

For trump to gain a tactical advantage over Putin.

For Putin to save face, bargaining with trump.

Will converge if the interests of this Trinity is hard to understand. But the other way seems to be no.