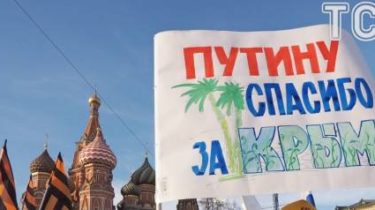 The Ministry of foreign Affairs of Ukraine responded to the decision by the EU Council , the extension of the “Crimean package” of EU sanctions. This reports the press service of the Ukrainian foreign Ministry.

The diplomats thanked the EU for its consistent policy of non-recognition of the annexation of Crimea and Sevastopol by Russia and the extension of the sanctions by 12 months “without discussion”.

The U.S. Senate almost unanimously voted for the extension of sanctions against Russia

“We appreciate the ongoing attention of the EU to the development of the situation in the occupied Crimea, which is characterized by serious systemic violations of human rights, in particular the escalation of repression by the occupation authorities against ethnic Ukrainians and Crimean Tatars. The support of the EU and partners is key to the restoration of the territorial integrity of Ukraine according to international law”, – stated in the text.

The foreign Ministry stressed that the sanctions of Western countries and condemnation of the actions of the Kremlin is one of the effective tools of international pressure on the state of the occupier. The Ukrainian side continues to rely on the renewal of sectoral and EU economic sanctions against Russia until full compliance with its international obligations and stop the aggression against Ukraine in Crimea and the Donbass.

As previously reported, on June 19 in Luxembourg, a meeting of the Council of the European Union at the level of Ministers of foreign Affairs, where he was approved sanctions against the annexed Crimea and Sevastopol. The Kremlin has commented on the extension of restrictive measures.

“Traditionally, negative (–Ed.) we as before do not agree with these sanctions. We do not consider them legitimate, and moreover, we believe these sanctions are detrimental not only to us but to the countries themselves, which are their initiators”, – said the press Secretary of the President Dmitry Peskov.

Video tip of the EU to extend sanctions against Russia