Witnesses called likely cause of a large fire on Khreshchatyk 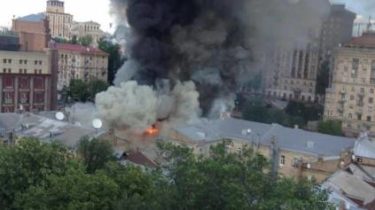 In Kiev, we have seen a fire in the building between the Central Department store and the Pechersk court with a burning trade unions Building on Maidan during the revolution of Dignity. Eyewitnesses say that such a large fire in the center of the capital was not exactly ever since, says the story TSN.19:30.

Almost burned to the ground two floors and the roof of the old building on the downtown – it’s more than a thousand square meters. At the time of extinguishing the flames worked here more than 20 vehicles and hundreds of rescuers. The fire was immediately assigned a high, second degree of gravity.

Extinguish the fire was hampered by the age and design of the building, because the old hardwood floors, the fire spread very quickly. Not allowed to extinguish the flames and a huge banner on the facade of the building. About the probable causes of fire fire not yet reported, but residents of the neighboring house speak, the emergency worked the builders, therefore, could erupt because of a violation of safety regulations.