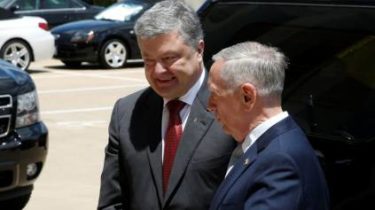 The President of Ukraine Petro Poroshenko in Washington met with his American counterpart Donald trump. The two leaders discussed the conflict in the East of Ukraine and further pressure on Russia, and promised to expand cooperation in the field of security, according to a story TSN.19:30.

Meeting of presidents lasted about two hours. Poroshenko described it as a full, productive, and long lasting. Most attention in the oval office was paid to the issue of sanctions. “Today the United States adopt additional sanctions are actually every month, and I see the US position as a reliable strategic partner of Ukraine. The United States remains loyal to the Minsk agreements, and we discussed the steps that will now be made,” – said the Ukrainian leader.

According to Poroshenko, trump has no plans to abandon the Minsk format of finding solutions to the crisis in the Donbas, although earlier there were such concerns because of the statements of the Secretary of state Rex Tillerson. With him will meet Poroshenko in a few hours. “The United States is our partner, we are very interested in attracting US to the active process. The United States is a country-guarantor of the Budapest Memorandum, and today’s meeting reaffirms the importance of Ukraine to the United States and a strong commitment to the support of our state”, – said the President of Ukraine.

Also at the meeting in the oval office, where in addition to Ukrainian President was attended by the Advisor to Donald trump on national security Herbert McMaster, Vice-President Mike Pence, the Minister of foreign Affairs Pavlo Klimkin and US Ambassador to Ukraine, Valery Chaly, it was about the strengthening of military-technical cooperation. These issues Poroshenko already in these minutes, discussed in the Pentagon with the Minister of defense of the United States. The sides also talked about cooperation in the energy sector, in particular the supply to Ukraine of American coal from Pennsylvania.