At the children’s hospital of Kiev, the volunteers after two years of preparation, opened a school 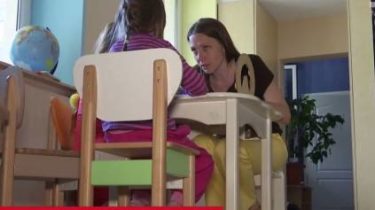 In the Department of mother-child health clinic for HIV-infected children opened a school. In its creation was attended by 13 companies and about one hundred volunteers, says the story TSN.19:30.

To the hospital children with severe complications who are forced to be under the care of doctors for several months, and even years. It is clear that after such absences back to school program and to catch up is almost impossible. So enthusiasts set out to attract children and teachers to equip them with room to exercise. And after two years of preparation, it was done.

Now children teacher of Ukrainian and English languages, history, biology and the foundations of health. Little patients are asked to add the math, but this teacher position is still open. The school calls wanting to help kids teachers – to respond.

In the project took part and the 1+1 TV channel. School curator Natalia Moseychuk believes that volunteers should endeavour to catch the Ministry of education. Children who are on treatment, are hopelessly behind their peers – and this applies to all hospitals in the districts and regions. “Before this project, it is necessary to attract officials from the Ministry of education. They must see this problem. Now it is performed by volunteers, but that’s their business, let them do it! Bet the teachers who come here – it is the task of the Ministry,” she said.