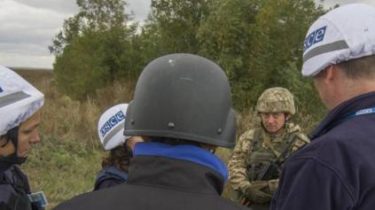 As stated in the operational report of SMM OSCE, one patrol, composed of six observers in two armoured vehicles were at the observation point at the train station. Observers saw two gunmen, one of whom was armed with a gun, heading towards the second patrol, which was at a distance of 150 meters from the first.

11.06 in both patrol heard shots from small arms. Then, the fighters in balaclavas went to the second patrol and start shouting aggressively towards observers. Four minutes later, both of the patrol tried to leave the area. When a second patrol began to pull away, an armed gunman ran up to the second SMM vehicle and tried to open the door on the driver side, and then to smash the butt of the side window. Him to do it failed and it ran for the first car of the second patrol.

The OSCE will increase its monitoring mission in the Donbass

Then the gunman turned and pointed the gun at the driver and the front seat passenger in the second patrol car No. 2. Both the employee and the OSCE raised his hands up.

“When an armed man approached the side of the car and tried to open the door on the passenger side in the front seat, the driver stepped on the gas pedal. At the time when the SMM vehicle was leaving, the armed man was hit with the butt of the right-side rear window on the right side, thereby slightly damaging it”, – stated in the message.

Militants “DNR” are not allowed the OSCE to warehouses with ammunition

The gunman then released into the air of all small arms, and then fired three shots in the direction of the patrol, but a bullet in the car was not hit. 11:21 when all the cars of the OSCE patrols left the area, the observers saw that the separatist held them at gunpoint of his gun. Subsequently, the observers returned safely to their base in Donetsk.

“The mission was informed by the Joint center for control and coordination (JCCC) about what happened. SMM also appealed to the SCCC with the request to understand with this incident”, – is spoken in the message.