In Kiev fast three MP, and in Lviv to protest the refusal to eat started their bereziuk and Rawfoodist 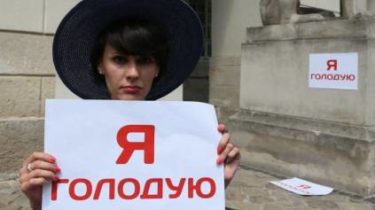 Senior hunger-strikers are protesting just under administration of the President against inaction of the authorities on the issue of garbage removal from the city, says TSN.16:45.

The Chairman of the faction “Samopomich” Oleg Berezyuk did not leave the place since yesterday after lunch he was joined by Vice-speaker of the Verkhovna Rada Oksana Rawfoodist. She also announced a hunger strike. They were joined by another MP from the “Samopomich” Taras Pastukh therefore now three people on hunger strike.

The deputies moved into the shade under the House with chimeras. Here gathered a group of their support, about 20 people. Oksana Syroyid says this decision was made the day before, but today she after a quarrel in the hall of Parliament was convinced that this must be done.

Bereziuk at the meeting of Parliament today is no – continues hunger strike near the presidential Administration. He says now he feels tired, drinking only water.

In Lviv, under the town Hall also two namesakes of starving and hungry people of Kiev – bereziuk and raw foodists.

Lviv bereziuk and raw foodists are demanding that the city government eventually took out garbage and fixed the problem. Refused to eat Olga bereziuk – acting Director of the Department of internal and information policy of the Lviv regional administration. The clerk took a leave of absence for the duration of the protest. To the town Hall came with water and a bag with a change of clothes. Subsequently, she joined Alexander Syroid – community activist and assistant to the Deputy of city Council from Dill.

Videoo of Lviv, under the town Hall fast namesakes of deputies bereziuk and Syroid

It is known that by starving out the mayor of Garden asked if they need any help. The debris situation in Lviv is rampant. In residential areas trash is not taken out for more than a month. On the asphalt rots 9 thousand tons of waste. Doctors warn of an outbreak of intestinal infections.

Note that in Lviv today is on the Minister of health Suprun – she saw no reason to declare the environmental emergency.