Police are investigating a fire on Khreshchatyk as arson 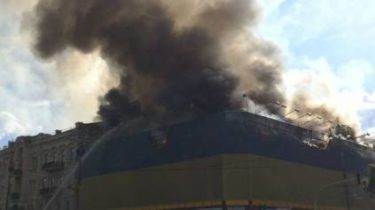 Police opened criminal proceedings on the fact of fire in the building on Khreshchatyk in Kyiv and investigates arson.

The police said that the fire happened around 17.00 on June 20 and eliminated already in the evening around 21.00. The fire destroyed the second and third floors of the premises of the Central store, and damaged roofing.

“On this fact the investigative Department of Shevchenkovsky police Department initiated criminal proceedings under part 2 of article 194 (Intentional destruction or damage of property) of the Criminal code of Ukraine. The final cause of the fire will be installed in the course of the investigation, including the results of the appointed examination”, – stated in the message.

Videosbusty hotel and historic negotiations: what is known about the burned in Kiev building

The people’s Deputy and Advisor to the mayor of Kiev Dmitry Belotserkovets also expressed the opinion that the fire in the house could be intentional in order to increase the area of the building.

“Unofficially, my personal conclusion, from a fire certainly can win the owner. So arson, theoretically, could be intentional. Motivation possible arson lies in the increase in commercial space of the building,” – wrote on his page on the social network Facebook.

According to him, now the owner and potential developer of the site can try to remove from the building the status of a monument of architecture on the basis of examination of the impossibility of recovery of the object, and then reconstruct it with a significant increase in the area.

We will remind, large-scale fire occurred on Khreschatyk street on June 20. The building, which broke out, is located on the corner of Khreshchatyk and Bohdan Khmelnytsky, opposite the Central Department store. It is a public catering and shops, and beside the Pechersk court. Rescuers extinguished the fire late in the evening. The fire burned construction materials, partitions and ceilings between the second and third floors and roof of the building. In addition, there is the threat of partial destruction of the building. While extinguishing a fire the dead and injured were not.