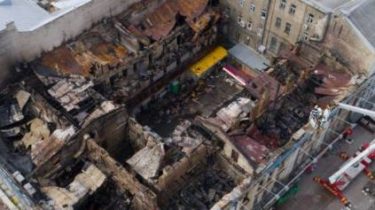 Former members of city Council Vladimir deinega and Vyacheslav Suprunenko argue that they do not own the building at Khreshchatyk, 40, which burned the day before.

The owners of the building, the ex-Deputy called in the media. It was reported that each of the deputies owned half the house. The press noted that the ultimate owner of the official of the company, the owner of the building “AB Investment and Development” is a British-Cypriot offshore company, and there are Suprunenko and Deynega.

Videopoke fire: looks like a burned house on Khreshchatyk from the height

Ex-MPs do owned the building until 2012, but assured TSN that went out of business.

Deynega announced that it has sold its share of the British-Cypriot company and no longer has a relationship to the building.

“Today, in five years I have nothing. My company was 50%, then came the British firm and the building she went. Who is now the owner – I can only guess,” – said deinega TSN on the phone.

The same repeats and Suprunenko.

“In 2012 I was forced to withdraw from this project, in connection with a difficult political situation at that time in our country,” commented TSN brother Vyacheslav Suprunenko Alexander, who also had to do with this business.

Note that the firm “AB Investment and Development”, believes that the main cause of fire weather conditions, and all media reports about the arson – “idiocy”.