In an Egyptian tomb, researchers have unearthed 3,000-year-old wooden prosthesis of the finger 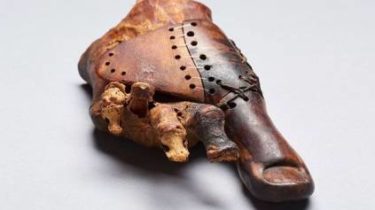 In Egypt in the tomb of a Muslim Saint, Abd-El-Kurna, archaeologists excavated one of the first prosthetic parts – 3000-year-old wooden finger, reports the Metro.

The study, researchers found that the prosthesis of the finger belonged to the daughter of a priest, which amputated finger.

Archaeologists have found dental fillings, of which 13 thousand years

Finger carved out of wood and was attached to the leg strap. Scientists from the Egyptian Museum in Cairo noted that the prosthesis of the early iron age was made by the professional of that time.

“The fact that the prosthesis was made in such a careful way that suggests that the owner was aesthetics, comfort and naturalness of the prosthesis, and that he could count on highly qualified professionals to provide it.”

Earlier, British archaeologists discovered the forgotten town of harla , Eastern Ethiopia. According to legend, he was considered the “city of giants”, since the construction of the city was built of large and heavy stone blocks that people could not move.