Duck sorry. As in the Network laugh at the soaked photo of Putin and Medvedev 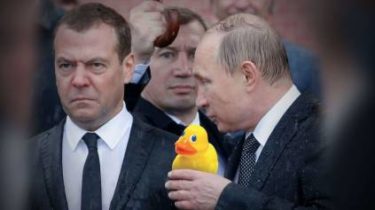 June 22, Russia celebrates the date of the beginning of the great Patriotic war, so the policy has come to lay a wreath at the monument of the Unknown soldier. In the picture, they were wet from head to toe, and because of the heavy rain on Putin’s head was clearly visible baldness.

Photograph of the head of the Russian Federation near the wreath reminded users confusion with the ex-President of Ukraine Viktor Yanukovych when he fell arrangement of flowers and branches.

I could not resist pic.twitter.com/GdawKFTNle

Laughed users and due the offended expression on the face of Medvedev. Nick joked that Putin took away his duck. It is a constant subject for jokes after the FBK video was removed from the residence of the Russian Prime Minister, on whose territory there is a lake with a house for the ducks.

– Well, I’m sorry, Smoke, in the eighteenth year once again, I want to be President! pic.twitter.com/1wUfg0O0hC

Had the umbrella open. Throughout the save.

Photo of the day pic.twitter.com/9qkc9kjkDH

Why, Mr. Anderson, why? In the name of what? What are You doing? Why, why get up? Why continue to fight? pic.twitter.com/p49lGlggKQ

Look what the wreath together, hold, fear pic.twitter.com/KhX6hpS7Qn