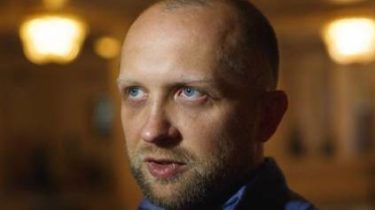 MP and involved in anti-corruption investigation of the mining of amber Maxim Polyakov during a speech in Parliament called as soon as possible to deprive him of his immunity.

The MP from the “popular front” declared that “I am absolutely convinced of the correctness and legality of their actions.”

“Yesterday the Prosecutor General’s office received a petition from the NAB and SAP on the lifting of the parliamentary immunity of several deputies. This list is me. Require as soon as possible make presentation about me in a sessional hall”, – quotes Лига.net his words.

As previously reported, the Deputy from BPP Borislav Rosenblatt and MP from Narrante Maxim Polyakov I want to strip immunity. It comes to the development scheme, which would have legalized the production of amber under the guise of land reclamation. In this case, 20 Jun searched the state forestry Agency. The defendants in the case are two of these MPs. In General, it is declared suspicion six persons – two security guards Rosenblatt, assistant Deputy and three representatives of interfractional Deputy Union “Deputy control”.

The people’s Deputy from BPP Boryslav Rozenblat security guard who was detained on a bribe of 200 thousand dollars, said the searches of his assistants.