Merkel and macron prepare Russia sanctions, and Poroshenko is flying to an important meeting in Brussels 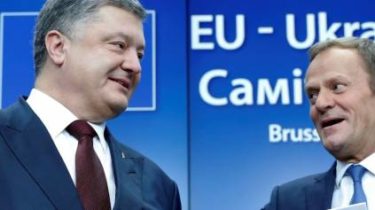 The President of Ukraine Petro Poroshenko today, June 22, will visit Brussels. There he will meet with President of the European Council Donald Tusk. They will discuss the worsening situation in the Donbas and the preservation of sectoral sanctions against Russia.

About it the correspondent of “Radio Svoboda” Vitaly Yeremytsi, says the plot of TSN.Ranok.

In Brussels today is also the start of an important EU summit. And today’s main question – economic sectoral sanctions against Russia because of the failure of the Minsk agreements. Poroshenko in conversation with the President of the European Council, of course, will insist that the sanctions should not only hold on but also to strengthen them.

The issues of peace, war, and famine. Poroshenko in Washington announced the results of the visit to USA

Meanwhile, diplomatic sources it became known that the sanctions today, German Chancellor Angela Merkel and President of France Emmanuel macron, as the leaders of the “Normandy Quartet” will, obviously, propose to extend. Because the current sanctions in December, coming to an end. This question is just for this purpose and included in the program of the EU summit, where it needs to be approved. Final formal extension of sanctions in exactly the same form as now, will be done shortly after the summit – for the next six months.

Also in terms of the Brussels visit of Poroshenko – meeting, so to speak, of the same party – the so-called “minisummit”, that is, the summit of the representatives of center-right parties belonging to the largest political force in the EU – European people’s party. During this summit and after a possible meeting Poroshenko with leaders of other member States and the European officials.