The building permit reserve. What MP Dovgy could be imprisoned for eight years 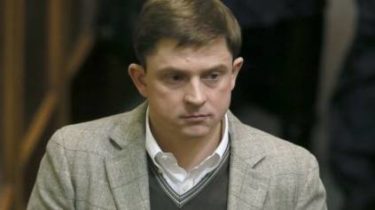 The state office of public Prosecutor asks Parliament to consent to the criminal prosecution of the Deputy group “people’s Will” Oles Dovgy on suspicion in abuse of official position and Commission of crime by group of persons by prior agreement.

This is stated in the representation that is at the disposal of the edition “Ukrainian truth”. Document journalists received from sources in the Verkhovna Rada.

Courage Dovgy and passport Rosenblatt: how the deputies react to the prospect of losing immunity

Dovgy is accused of the case opened on the fact of abuse of officials of the Kyiv city Council authority in the interests of third parties than were caused grave consequences to the interests of the state in the face of the territorial community of Kyiv. In the period from 2007 to 2009 Oles Dovgy, together with officials of the Main Department of land resources of the city of Kiev and other persons provided 1 Oct 2007 adoption by deputies of the decision on the illegal transfer of land.

In particular 23 service cooperatives for residential development on the 21-th km of the Metropolitan highway in the Goloseevsky district of Kiev were allocated plots of land is actually located on the territory of landscape reserve of local importance “Zhukov Island”.

As a result of these illegal actions, according to the certificate of the State inspection of agriculture in Kyiv №01-11/22-59 from 31.10.2016 was caused by the loss of $ 81 691 726 UAH. (as explained in the Prosecutor’s office, the exact amount of damage will set inspection) that in 250 and more times exceeds untaxed minimum incomes of citizens.

In the case of removal of parliamentary immunity and the proof of guilt Dovgy is threatened by imprisonment for the term from 3 till 8 years with deprivation of the right to occupy certain positions or engage in certain activities for a term up to 3 years, a fine of from 500 to 1,000 non-taxable minimum incomes of citizens.

Earlier, the Prosecutor General of Ukraine Yuriy Lutsenko said that the Verkhovna Rada made a submission on giving consent to the criminal prosecution of people’s Deputy Oles Dovgy.