The explosion of the jeep in the center of Kiev: the police have disclosed details about the bomb 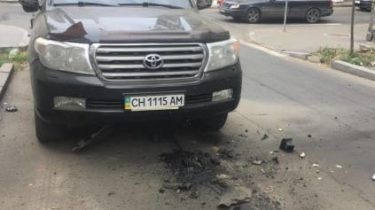 The explosion of the car Toyota Land Cruiser occurred in the capital when the driver got behind the wheel and stopped near the pickup with vegetables. This was stated by the police, according to a story TSN.19:30.

The time was recorded by the surveillance camera of a neighboring house. Law enforcement officers are already saying that the explosive device was attached to the bottom of the car – under the driver seat. The latter escaped with injuries to his legs, but refused hospitalization. Assistance rendered to him in the emergency room, after which the man decided to continue treatment at another institution.

Law enforcers do not specify how powerful was the bomb that went off under the car. But have already defined the character to bring it into action. “According to preliminary findings, the method of detonation – remote”, – said the chief of police of Kiev Andrey Krishchenko.

As reported, the jeep exploded at the intersection of Turgenev and Poltava. The blast blew out the Windows of neighboring houses and cars that were nearby. The police instituted criminal proceedings under article about attempt at life of the person. The investigation has two versions of a crime: victim’s personal life and his work. According to TSN, the attack was committed on the founder of the dacha cooperative in the Crimea on the territory of national reserve “Chersonese Taurian” near the sea.