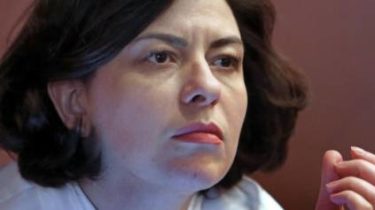 The bills on the reintegration of Donbass and restoration of the state sovereignty of Ukraine on the temporarily occupied territories in the East, which was announced by the President Petro Poroshenko NSDC Secretary Oleksandr Turchynov, in fact, deny the fact of Russia waging war against Ukraine.

About this in his article for DT.UA Deputy Chairman of the Verkhovna Rada of Ukraine Oksana Rawfoodist.

Raw foodists believe that the adoption of new legislation will maintain the status-cov in recognition of the war and the reaction of Kiev on the Russian aggression, because it has clear signs.

“Proposed “reintegration” of the President, in principle, denies the fact of war. “Reintegration” means that there was “disintegration”. That is not, Russia has come, invaded Ukraine and killed 10 thousand people, and some processes in the country led to the fact that part of the Donbass and Lugansk “desintegrates”. In fact, this recognition of the internal conflict in the East of Ukraine, that is, the civil war,” said Rawfoodist.

The politician also reiterated that Turchynov “is planning the resumption of sovereignty in Donetsk and Lugansk regions, does not mention the reasons for the loss of this sovereignty.”

It also draws attention to the fact that the announced draft laws provide for the restoration of sovereignty exclusively in the occupied territories of Donetsk and Lugansk regions, ignoring the Crimea.

“So, for Russia, these territories have a different status, because the Crimea was necessary for Russia as a military base, and the Donbass as a factor of destabilization of Ukraine. But for Ukraine and Crimea and parts of Donetsk and Lugansk regions is still occupied territory. Therefore, a reasonable question arises: if the President wants to “reintegrate Donbass” and the national security Council wants “to restore the sovereignty over the temporarily occupied territories of Donetsk and Lugansk regions”, — the Crimea “reintegrate” or “restore sovereignty” in Crimea, Ukraine has no plans?” – wrote Vice-speaker of Parliament.

In her opinion, the different approaches to the Crimea and Donbass, and the distinction between these acts of aggression is a latent recognition of the annexation and reduces the chances of their de-occupation.

We will remind, earlier the Deputy Minister for the occupied territories, the George Tooke said that the adoption of the law on de-occupation of Donbass does not mean that Ukraine will immediately begin full-scale war in the East.

On 14 June President of Ukraine Petro Poroshenko instructed to develop a bill on the reintegration of Donbass, which will include a number of measures for the return of the occupied territories of Ukraine.

The President stressed that the key position is the reintegration of these territories. According to him,the bill is based on the terms enshrined in the Minsk agreements.

The speaker of Parliament Andriy Parubiy, in turn, said that the draft law on de-occupation of certain regions of Donetsk and Luhansk regions, will allow to use all branches of the military without restriction of democratic procedures and recognizes areas ORDA occupied.