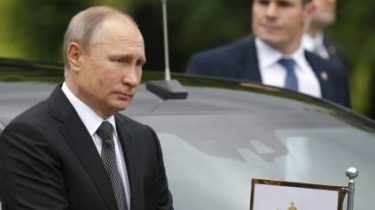 The Ministry of foreign Affairs of Ukraine expressed “strong protest” over the visit of the delegation of the Russian officials headed by Vladimir Putin to the territory of temporarily occupied Autonomous Republic of Crimea. The corresponding message distributed by the press service of the diplomatic Department.

“The Ukrainian side considers the mentioned visit and other so-called “visits” of Russian officials in the temporarily occupied Autonomous Republic of Crimea and Sevastopol a grave violation of state sovereignty and territorial integrity of Ukraine, cynical and defiant disregard of the Russian party of the generally recognized norms of international law, including the UN Charter, resolutions of the UN General Assembly “Territorial integrity of Ukraine” of 27 March 2014, “the Situation with human rights in the Autonomous Republic of Crimea and Sevastopol”, dated 19 December 2016, as well as commitments for bilateral and multilateral treaties, with parties of Ukraine and Russia”, – said the Ukrainian foreign Ministry.