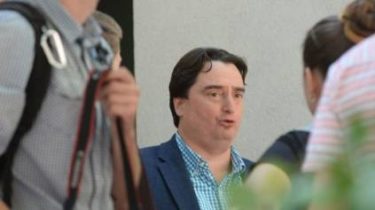 Press Secretary of the Prosecutor General of Ukraine Larisa Sargan posted a video from the restaurant, where a man similar to the editor-in-chief “Strenia” of the Igor Guzhva, discusses the issue of extortion of bribes for certain services.

Video from may 16, 2017 showed on Wednesday during a briefing the public Prosecutor Lutsenko.

So, the man, similar to Guzhva, unknown video discusses how to ask customers to remove material from the page of the online edition, and in complete silence. It offers for $ 30,000 to collect three materials for people’s deputies from the Radical party Dmitry Linko, Alexey, Lena, Oleg Lyashko. Then men discuss whether this amount is appropriate and how much is silence.

Guzhva also says that he has prepared unpublished materials on these people.

In the end, the men agree that Guzhva can remove the “two-material thirty” and “shut up in thirty-five a month.”

Prosecutor General Yury Lutsenko has declared, that will later be released video of bribe-taking and recording of marked money Guzhva.