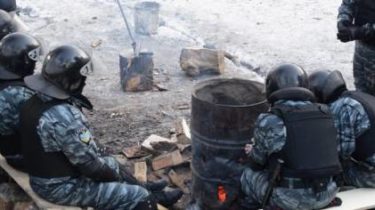 Eks-employees of special division “Berkut”, suspected of the shooting of the 48 participants of the Euromaidan in February 2014, announced an indefinite hunger strike in jail.

This was stated by their lawyer Alexander Gorodinskiy the TV channel “112 Ukraine”.

His hunger strike former Berkut officers explain political persecution and politically motivated criminal proceedings. There are more than three years in detention. According to him, the ex-Berkut officers continue detention automatically, without motivated reasons for this.

“So they want to draw attention, first, to the public, and secondly, the international community and the competent authorities, in order to examine the issue of illegal detention,” said the lawyer.

Numerous travel and party in Moscow. What position in the network of the daughter ex-the Berkut officer Kusyuk

We will remind that on June 12 the day of the national holiday of Russia, the country has seen dozens of mass anti-corruption rallies. Police seized more than a thousand people, among whom were children and journalists. And among law enforcement officers lit up and the infamous former head of the Kiev “Berkut” – the Colonel Sergey Kusyuk. He’s wanted on suspicion of involvement in mass killings of activists Bromide.