In the Donbass killed two soldiers. Chronicle of the ATO 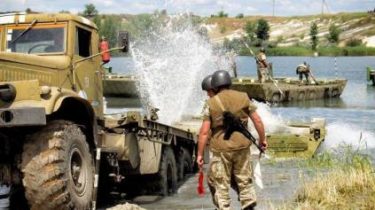 In the area of ATO in the Donbas on Saturday, June 24, killing two Ukrainian military. Another soldier was wounded, and in other combat trauma. During the Saturday there were six fire fighters.

“Despite the achieved agreement on the ceasefire from today, June 24, Russian-terrorist gangs still are unable to fully perform its obligations. Since the early days of the militants 6 times opened fire on the forces ATO. However, such violations are fixed only on Donetsk and Luhansk directions. In the seaside area invaders weapons today was not used. Mostly bandits carrying out attacks before eight o’clock in the morning, – informs the press center of staff ATO.

Donetsk direction. The militants were beaten twice on positions of the Armed forces of Ukraine. In particular, even at night fighters fired from small arms and heavy machine guns one of the strongholds in the southern suburbs of Avdeevka. Of the same weapons, as well as from anti-tank grenade launchers, at dawn opened fire on the fortifications of the ATO forces near Verhnetoretskogo.

Lugansk direction. On this stretch of the frontline fighters in the early days carried out bombardment of low density the Ukrainian positions in the area Katerinovka of the Minsk agreements prohibited mortars of caliber of 120 mm. Also at night and early in the second half of the day twice from the automatic easel grenade launchers fired at Ukrainian soldiers who hold the Fort in the Crimean. In addition, in the morning from small arms beat on the Ukrainian fortifications near Trinity.