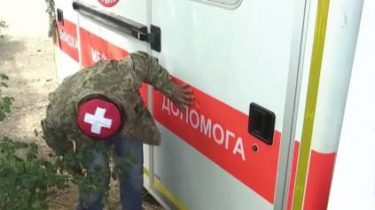 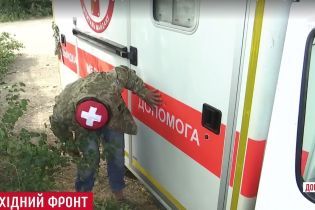 In the Azov districts of the ATO zone has occurred an attack on a military medical Marines. His fighters covered with fire from large-caliber weapons, according to a story TSN.19:30.

The tears were so powerful that mnogokilometrovaya sandbags and earth, which were used for the arrangement positions, scattered tens of meters, like feathers. Their remnants still hang from the tall trees nearby. The military has collected several boxes of pieces. The soldiers are saying that the shelling lasted more than an hour and consisted of a half dozen explosions.

The air attack was coordinated by a Russian drone. “Bill of health points – completely overwhelmed. Damaged wires, medicines, equipment,” stated one of the soldiers. Miraculously survived only on all battalion vehicles – the car was hidden under a camouflage net and escaped with only minor “injuries”: the fragments broke the glass and tore out the door.

Military doctors are surprised by the attack a non-combat position in the rear, far from the front line. Moreover, prior to that, on both sides of the front line was already known about the new two – day truce for the sake of peace during the school prom. However, this has not stopped the Russian artillery – the soldiers have no doubt that so aptly and clearly worked as specialists in their field, not the local “harvesters and miners.” And the markings on the shell fragments leaves no doubt about their Russian origin. Military is easy to figure out: beat cannon artillery 122-caliber from the direction of the occupied Sahanki.