More than just a picture: Poroshenko told about the impressions from the meeting with trump 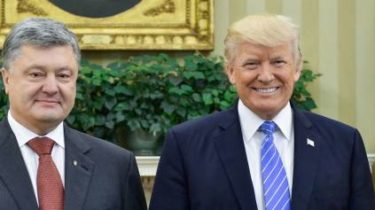 “The task before us was very important, and I want to remove any insinuation that the visit drop-in, only to be photographed – we don’t need it. No pictures of anything if we did not add,” – said the head of the Ukrainian States in the interview to Ukrainian TV channels on Sunday.

Videorecord such a powerful visit to the US, Petro Poroshenko

“As for the handshake – it was the handshake of partners and I am sure that the atmosphere that begins with a handshake, was very friendly, very partnership, very reliable. I felt very comfortable,” he said.

Also, the Ukrainian President said that during the meeting, trump asked him what he could do.

“If to speak about my main impressions from the visit to USA and meeting with President trump – the key of his position was not to give advice but he clearly asked: “Peter, how can I help?”. This position is a true partner, a true friend of Ukraine”, – said Poroshenko.