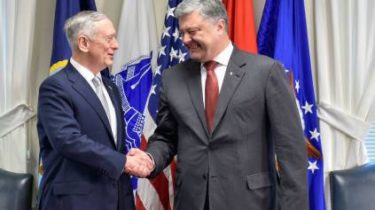 Authorities in the United States can take a decision on providing defensive weapons to Ukraine until October of this year.

In an interview with Ukrainian TV channels on Sunday said President of Ukraine Petro Poroshenko.

According to the President, during his recent visit to the US in the Pentagon and the White house, he confirmed that the issue of supplying Ukraine with defensive weapons will try to resolve before the end of the budget year, which lasts until October.

Videorecord such a powerful visit to the US, Petro Poroshenko

Poroshenko also noted that in the next two or three months, Ukraine will be visited by the head of the Pentagon James Mattis. During his visit, is expected to sign defence agreements between Washington and Kiev.

“Regarding the defense agreements we have today is in fact the agreed text. We are within two to three months waiting for the visit of U.S. defense Secretary in Ukraine. During this visit, we hope that agreements will be signed. Emphasize that this does not stop the process of granting Ukraine defensive weapons, not to mention lethal weapon, because that’s what we set priority,” Poroshenko said.

More than just a picture: Poroshenko told about the impressions from the meeting with trump