The Russians wanted to steal our history, but we do not allow Poroshenko about Anna Kiev 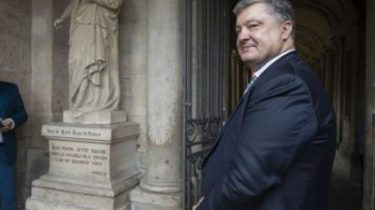 The President of Ukraine Petro Poroshenko has honored the memory of the Queen of France Anne of Kievand laid flowers for her monument in Senlis near Paris.

During the speech, Poroshenko called Queen Anne a symbol of the partnership between France and Ukraine.

“The world today needs to be with us in the conditions of Russian aggression. You should call the aggression – aggression, Russia is the aggressor, and the Anne of Kiev, Anna of Kiev”, – said the President.

“And even when the Russians wanted to steal from us our history, we do not allow. The whole world will now know Anna as Anna of Kiev and the symbol of the partnership between France and Ukraine, between Paris and Kiev”, – said the President of Ukraine.

Recall, may 29, during a joint press conference with President of France Emmanuel Macron, the head of the Russian Federation Vladimir Putin has declared that a daughter of Prince Yaroslav the Wise Anna was “Russian”.

Ukrainian President Petro Poroshenko in his speech on the ratification of the Association agreement responded with a joke that Putin was trying to “steal” Anna in front of the whole of Europe. He added that Ukraine was part of Europe from the times of the Principality of Yaroslav the Wise.

“By the way, since the old Ukrainian Prince Yaroslav the Wise and his daughter-the inhabitant of Kiev Anna Yaroslavna that just yesterday, Putin tried in front of the whole of Europe to steal the Russian history”, – said the head of Ukraine.

The whole battle around Anna Kiev launched official accounts of Ukraine and Russia in Twitter.