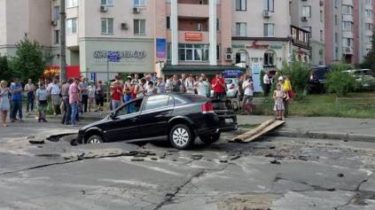 Earth from under the wheels. On one of capital streets of a car while driving fell to the ground. A two-meter pit was formed from-for break of a heating system and the flow of boiling water began to fill the cabin of the car, which was a woman with 9-month-old baby and 12-year-old boy, says TSN.16.45.

To save them rushed passers-by and workers “Kyivenergo”, which arrived on the scene before the accident, however, did not even put up warning signs.

“I started to ask people that they pulled at least a small”, – the victim tells.

Les tries to hold on, but every time he recalls what turned an ordinary trip to the eye doctor, breaks down in tears.

“I have now is before the eyes of the situation, when I sit in the car with two young children and me is filled with boiling water. I locked the doors and into the cabin begins to fill the boiling water. I like the American blockbuster has been. Now I carry a hammer just in case to knock out the window,” the woman said.

Blocked the road and flooded the asphalt: there are photos after the breakthrough of the heating system in Kiev

The car went into the corner at low speed, and it saved both passengers and the car. The water that was already on the pavement, the woman was not alarmed, because for Kiev, the situation is familiar. And not a single warning sign, he says, was not. This is confirmed by Taras – casual the witness who shot this video.

Knew what to do workers “Kyivenergo”, which already was in place. They threw the Board into the boiling water and pulled passengers through the window. As it turned out, caused an accident – broke through the heating duct 88. And such streets as this, in the capital 70 per cent.

“The length of the Kyiv heating networks amounts to 3.5 thousand kilometers and I tell you that 2.8 thousand km of the network have exhausted their resources,” says public utilities.

That is, to fall suddenly in any place, to predict – it is impossible. Part, incorporated in the tariff for the repair and maintenance of heating systems, says, needs to close the other holes. And waiting for help from KSCA.

Meanwhile, Les is regaining consciousness, and her husband is trying to assess the damage.

“The damaged bumper, wing, brake disks, engine a lot of sand… There is sand and stones near the engine directly, so I am very worried that the engine has not suffered”, – says the owner of the car.

To investigate the damage will already be at the service station, and only then the owners will have to decide where to look for someone to blame and from whom to demand compensation.