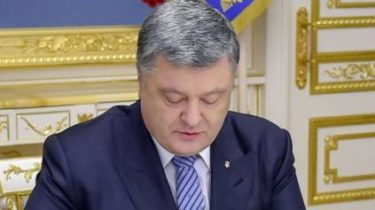 About it reports a press-service of administration of the President.

In Mariupol said goodbye to the victims of the explosion, Colonel of the SBU, and Poroshenko awarded him posthumously

“American paramedic Joseph stone worked in the Special OSCE monitoring mission in Ukraine (SMM OSCE), which carries out an observation mission for the compliance of the implementation of the Minsk agreements on the demarcation line and into the occupied Russian territory of certain districts of Donetsk and Lugansk regions (ORDA). Died April 23, 2017 during the execution of their duties in patrol surveillance”, – stated in the message.

Car Special monitoring mission of the OSCE, which, along with Joseph, were two members of the mission, stepped on a land mine laid by terrorists near Prishib village in the Luhansk region. Joseph stone died from wounds, two of his colleagues seriously injured.

In turn, 16-year-old goalkeeper of football club “Avangard” Stepan Chubenko — national Hero of Ukraine, who was tortured and shot by the militants “DNR” for Pro-Ukrainian position.

2014 Stepan with friends took part in rallies in support of the integrity of Ukraine, which was held in Kramatorsk. The guys helped the Ukrainian military, helped local residents during the attacks, which were carried out by Pro-Russian militants. Risking his life, Stepan Chubenko was removed from the town square the flag of the so-called “DNR”.

“In June, 2014, Stepan was detained by fighters of a battalion “Kerch” for yellow-blue ribbon on the backpack. The guy was taken to Kuznetsovo-Mikhailovka, where after being tortured and shot”, – is spoken in the message.