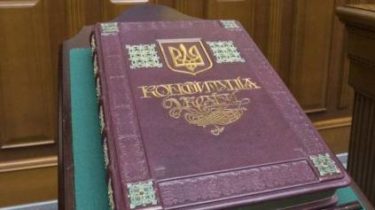 Wednesday, June 28, celebrate the 21st anniversary from the time was adopted the Constitution of Ukraine. Constitution day is a public holiday and therefore June 28 in Ukraine is official day off.

The main document of the country was adopted by the Verkhovna Rada on the night of 28 June 1996, in the fifth year after the proclamation of Ukraine’s independence. After nearly a day of continuous work in the session hall of the deputies has adopted by 315 votes. On the same day the Constitution came into force. At the same time Ukraine was the last former Soviet Republic, which adopted a new Constitution, UNIAN news Agency reports.

The adoption of the Constitution consolidated legal foundations of the independent Ukraine, its sovereignty and territorial integrity, was an important step in ensuring the rights of man and citizen, has contributed further to raising the international prestige of Ukraine in the world arena.

Since that time, the Constitution was several times amended under the pressure of certain political forces or in accordance with the needs of the time. First time changes to the basic document of the country was made in December 2004. Then, for overcoming the acute political crisis during the Orange revolution, at the request of political forces, Viktor Yanukovych and Leonid Kuchma, the Ukrainian Parliament adopted the law No. 2222-IV “On amendments to the Constitution of Ukraine” and (in the package to it) on amendments to the law on presidential elections.

The Constitution of Ukraine Hoch ist wanono young, however has got uncarine storione roots. Have cut 1710 rock, if in the school Domnului absolute monarch to amerikansko Wine Nezalezhnist for I to Veliko francusko rivals lisalisa dozens of years, and Nashi, presure vzhe put she her on suti respublikanska-demokratichni manfest. Manfest, that for many years wiperight sviy hour. S Day Constitut Ukraine!

The law on the basis of the project Symonenko-Medvedchuk about the changes in the Constitution (about political reform) provides the transition from presidential-parliamentary to a parliamentary-presidential form of government, the formation of a government coalition of parliamentary factions, the extension of the parliamentary term to 5 years. The law came into force on 1 January 2006.

In addition, in 2011, made changes to the Constitution regarding local elections in 2013 on the activities of the chamber. However, since the beginning of 2014 amid the political crisis in Ukraine has intensified “return to the Constitution of 2004”. By this is meant the election of the Parliament by proportional system, and depriving the President of a significant part of the strong powers.

Already on 21 February 2014, the Verkhovna Rada constitutional majority of 386 votes adopted as a basis and as a whole without decision of the relevant Committee the draft law on restoration of the validity of certain provisions of the Constitution of Ukraine. The next day, given that this law was not signed by the President, the Parliament adopted a new resolution “On the text of the Constitution of Ukraine in wording of June 28, 1996 with changes and additions introduced by laws of Ukraine of 8 December 2004 №2222-IV of 1 February 2011 №2952-VI, of September 19, 2013 No. 586-VII”. This law entered into force March 2, 2014.

At the same time, this constitutional process in Ukraine has not stopped. Thus, the Parliament approved the presidential law on amendments to the Constitution of Ukraine (regarding the decentralization of power). The vote for him was marked by a scandal in which three of the five factions of the coalition (“Batkivschyna”, “Samopomich” and “Radical party of Oleh Lyashko”) supported the law, while the “Opposition block” former party of regions voted in favour. As a result, the fraction Lyashko left coalition. In addition, 2 Jun 2016 year the Verkhovna Rada adopted the law on amendments to the Constitution of Ukraine (regarding justice), or the so-called judicial reform.

Videoadobe authorities of Donbass of the Constitution of Ukraine postponed indefinitely