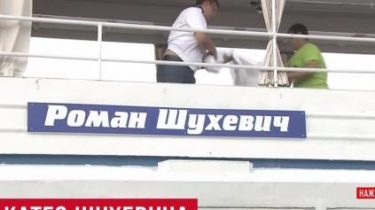 In Kiev, the boat is officially named after the legendary commander of the UPA Roman Shukhevych. Today celebrate the 110 th anniversary of his birthday, according to a story TSN.19:30.

Celebrations for the 10-metre quay of the River port of Kiev was headed by the Minister of infrastructure of Ukraine Volodymyr Omelyan. He specifically waited for the moment a live broadcast from TSN Studio to live show the lifting of the veil new decals on the boat. “Please Roman Shukhevych. With God!” – the Minister said.

The ceremony was also attended by the son of the legendary commander of the Ukrainian MP Yuriy Shukhevych. An additional reason for the joy of those who gathered for the celebration, was the news about the court decision regarding the possibility of renaming the Avenue General Vatutin Avenue Roman Shukhevych in the capital. 12 June the District administrative court of Kiev forbade the Council to sign and publish the decision on renaming of the Avenue.

The ship, which used to be called “Chestnut”, came to the ceremony in the red-black flag of the struggle of the nationalists of the mid-twentieth century for an independent state. He will continue to act as the ordinary pleasure boats, therefore, they can be to use anyone from Kiev or guests for walks along the Dnieper.