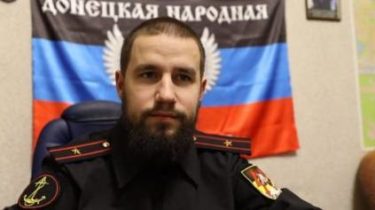 Former sidekick “Motorola”, and now the commander of the reconnaissance battalion “Sparta” terrorist organization “DNR” Vladimir Chinese official also in the Donetsk region will be tried in absentia.

In the Donetsk region Prosecutor’s office reported that it had completed a special pre-trial investigation.

Each “Motorola”, “Givi” and Zakharchenko: the journalist said the SBU detained the accomplice of the militants

“It is established that in April 2014, the 24-year-old native of Donetsk voluntarily joined the terrorist organization “DNR”, namely in its unit power unit, which was stationed on the territory of Slavyansk and Slavic area. In the future, after the creation in August as part of the illegal armed formation “reconnaissance battalion “Sparta”, which was headed by the citizen of the Russian Federation Pavlov A. S. (call sign “Motorola”), a man on his own initiative, for ideological and selfish motives, entered into the composition of this battalion, selecting Callsign “Vaughan”, and took the position of Deputy commander of the battalion”, – stated in the message.

In this position, from August 2014 to October 2016, along with “Motorola” he has provided leadership for this division, and also took part in the fighting against the Armed forces of Ukraine and other military formations of Ukraine in the area of human settlements Donetsk (near the airport), Uglegorsk, Shakhtersk, Snow, Ilovaysk, Debaltsevo, Peski and Shirokino.

A former accomplice “Motorola”, and now the commander of the reconnaissance battalion “Sparta” of the terrorist organization “DNR” …

In October 2016, after the death of “Motorola”, he was appointed commander of a separate reconnaissance battalion “Sparta” of the terrorist organization “DNR”, which includes about 300 people. As we know, Arsen Pavlov exploded in the Elevator of the housewhere he lived with his wife and children. One of the leaders of Donetsk separatists Denis Pushilin said that an improvised explosive device, except “Motorola” injured several people. In “DNR” the murder of the gunman accused of “Ukrainian sabotage-reconnaissance group”, and the interior Ministry of Ukraine the responsibility laid on his accomplices.