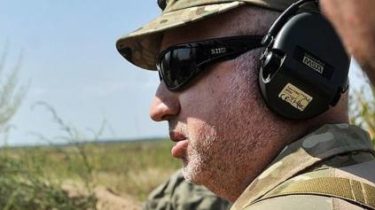 This reports the press service of the NSDC.

“Enemies will give up, not waiting”. Turchinov has tested a new rare weapons

“In 2015, made the important decision to increase the financing of the APU, in particular, defines the minimum allowance for soldiers-contract employees in 7000 hryvnia per month. It is actually possible to create a professional contract army. But the problem is that now the second half of 2017, and the funding for the military practically has not changed,” he said.

At the same time Turchynov noted that civil servants in the last two years have seen a significant increase in wages.”

“For example, many heads of departments of ministries and other Central bodies of Executive power, starting in 2016, received a salary that exceeded 30 thousand hryvnia per month. For comparison, today the total monthly income from premiums, allowances and payments of the combat brigade commander – a Colonel who is fighting on the front line, on average 19500 UAH”, – said Secretary of the NSDC.

He also gave the example that the official salary of the head of the Department of Central body of Executive power is 9115 hryvnia, additional payment for rank – 800 UAH. Meanwhile, the brigade commander salary – 1200 hryvnia, “but paid by the blood of the rank of Colonel, he receives an additional “already” 135 hryvnia.”

“I do not propose to reduce the salaries of officials. Worldwide, the civil service is responsible and well-paid job. I require in budget planning, which is now significantly increase the salaries of our servicemen,” – said Turchinov.

According to him, allowances for military rank – “the infamous 5 hryvnia for each next rank” – has not changed since 1999, so they need to be revised.

“The structure of financial support for the Ukrainian soldier must meet the standards of NATO, where at least 70-80% of the base salary and Supplement for the rank. We have now the figure is 10-15%,” – said Turchinov.

Videocarmen will increase the salaries of contractors Mat