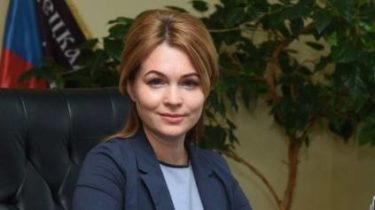 38-year-old native of Donetsk, which became the “Minister of Finance of the terrorist “DNR” announced the suspicion of financing terrorism and committing acts for the purpose of modifying the boundaries of the territory and the state border.

It is reported by the Prosecutor’s office of Donetsk region.

During a pretrial investigation it was established that the woman in November 2014, voluntarily joined the terrorists and took the position of the so-called “Minister”.

The woman continues to work for the terrorists, ensuring, by their actions, the financing of terrorist activities.

Due to the fact that “official” is in the temporarily occupied territory, she in absentia declared suspicion in Commission of crimes, special pre-judicial investigation proceeds.

We will remind, in a zone anti-terrorist operation detained the ex-militant “DNR”, which disappeared from APU with relatives. People under the influence of ideas of “Russian world” arrived in Donetsk and joined the militants in early July 2014.

After the mass liberation of the Ukrainian troops occupied towns and villages, the terrorist for a long time was hiding with relatives in one of settlements of the Donetsk region. It was there he was detained also by militiamen.