The worsening in ATO area: one Ukrainian soldier killed, one wounded 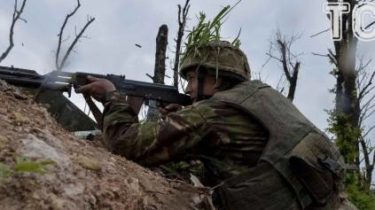 The headquarters of the ATO noted the aggravation of the situation in the Donbas over the past day. The militants again started to use banned weapons Minsk agreement.

On the Donetsk direction the militants shelled the fortifications at the mine Butovka, on the southern outskirts of the Town, in the Trinity, near Mayorsk, Verhnetoretskogo, Zaitsev.

At the direction of Lugansk under fire of the terrorists were strong points in Novooleksandrivka, Novotoshkivske, Stanytsia Luhanska.

About 19 hours the shelling sniper reference point in Novozvanivka received a fatal bullet wound to the Ukrainian military.

Least of all attacks at the end of the day was in the seaside area. The militants fired at ATO forces in Lebedinsky and Talakovka.

In the morning, the militants shelled houses of civilians of the village Water chetyrehstolpnyj from jet systems of volley fire. Launcher this weapon they made more mobile by mounting it in the back of a truck. Victims among the local people there.

The construction of the press center of staff ATO for the last day as 6 hours on 2 August 2017, the last day the situation in the zone ATO zag…

Posted by the Press center of the ATO headquarters on Tuesday, August 1, 2017

At 8.15 militants staged bombings of engineering ammunition near the settlement of Staromykhailivka, to simulate shelling by the APU.

In General, over the past day illegal armed groups 34 times violated the truce. 10 times used mortars, 5 – weapons, infantry fighting vehicles, 13 times shot from grenade launchers. In the fighting one soldier was killed, another was wounded.