120 thousand hryvnias of a salary and a life annuity: entered into force a new law on the constitutional court 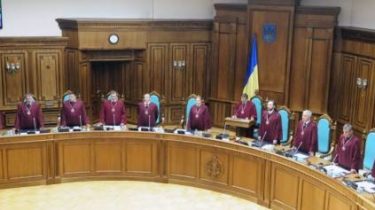 Today, August 3, the new edition of the law “On the constitutional court” came into force.

Yesterday it was published in the parliamentary newspaper “Voice of Ukraine”.

According to him, the court will consist of 18 judges. The President of Ukraine, Verkhovna Rada and the Congress of judges of Ukraine each appoint 6 judges.

The CC judge is appointed for 9 years without the right to be reappointed. The bill specifies a number of grounds for dismissal of a judge of the COP. At the same time, without the consent of the judge, the COP may not be detained or remanded in custody or arrest before a conviction by a court, with the exception of the arrest of a judge during or immediately after committing a grave or especially grave crime.

Videosample 120 thousand and life annuity: Poroshenko has signed the law on the constitutional court

The remuneration of a judge shall consist of official salary and surcharge for stay on administrative positions in the constitutional Court. The base salary of constitutional court judges is set in the amount of the basic salary of a judge of the Supreme Court (about 120 thousand UAH).

The judge retired COP receives a monthly lifetime allowance, which is paid in the amount of 50% of the salary of judges of the constitutional Court.