Evening activity of fighters and the fire of enemy rocket-propelled grenades. Digest ATO 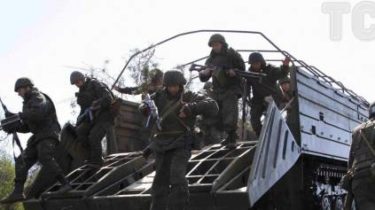 The militants during the day to carry out 10 attacks on Ukrainian positions with small arms. The main activity of bandits is usually fixed after 18 hours.

Between midnight and 18 hours on the Lugansk direction the criminals with small arms opened fire on the Ukrainian fortifications on the outskirts of Novoaleksandrovka. And strongholds in the Crimean and Novotoshkivske beat the enemy grenade launchers.

On the Mariupol direction the enemy fired 8 min caliber 82 millimeters near Pavlopol.

The construction of the press center of the ATO headquarters as of 18: 00 on 3 August 2017 In the ATO zone during the day did not show a downward trend…

Published by the Press center of the ATO headquarters August 3, 2017

And in Donetsk direction criminals fired from a grenade launcher mine Butko.

In response to the provocations of illegal armed groups ATO forces promptly opened fire in response, so fire opposition was not long.

Videotrace year ATO: in major cities still hard to find a shelter in times of danger

The militants “LNR” shelled a village near Popasna, were injured pensioner

“Ukrainian soldiers are in full combat readiness and are willing to give a hard and fast answer to the enemy in any part of the day,” – said the press center of staff ATO.

We will remind, during the August 2, illegal armed groups 30 times violated the truce. In the fighting in Eastern Ukraine losses among the Ukrainian military no.