To faint in the eyes of residents: TSN held in the capital the experiment on responsiveness and the help 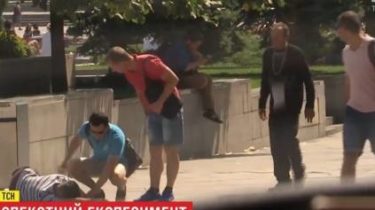 Third day in a row the thermometer shows almost 40 degree heat, must be solar and thermal shocks. The journalists toured different districts and I see how caring people are around us, according to a story TSN.19:30.

“Bad,” the man began at the Independence square. A few seconds in the consciousness of the actor have already cited the two men. “You’re not drunk? Give me your hand”, – summed up the asphalt they allegedly lost consciousness. Passers-by insisted on hospitalization and asked to move because of the threat of sunstroke. “You really scared,” admitted men when he learned about the experiment. And told ready to help, but how to proceed during the thermal and solar shock – don’t know.

Videots checked, the people of Kiev will be able to assist a person with heat stroke

Another area for testing is the city beach. There dressed man “faints” near holidaymakers, and even the rescuers, and falls to the sand. However, the person no one pays any attention, even the woman who was sunbathing a few meters away. Assistants don’t last five minutes go to the rescuers – say that lies close to the man unconscious. “I understand, I’ll be right there,” answers one of the workers on the beach. The Savior fits effortlessly and asks about health. Subsequently insists that immediately came over and suspected sunstroke. Olga says – this was the first time since the beginning of summer.

However, until local nurses have already been treated with similar symptoms. The woman warns that the sun can overheat for 15 minutes. “Mostly elderly people. Dizziness, headache, consciousness can lose”, – says Lyudmila Bagel. “I was watching to see. Think well, young man, apparently a bit too much to drink. I would have come, if even a little bit you lying down,” says Elena Chuprina resting.