Dobkin compares himself to a Somali pirate 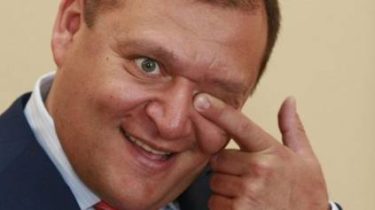 MP from “Opposition bloc” Mikhail Dobkin compares himself to a Somali pirate, speaking about the new court decision against him.

The MP said on air of “112 channel”, transfers “Ukrainian truth”.

4 August Pechersky district court has arrested two cars, two houses, land and wine cellar Dobkin. The MP said that this decision was made without his participation and without his defenders. According to Dobkin, he didn’t receive the summons, and the decision of the court has learned from the press.

“I don’t know what GPU that is accusing me of imaginary crimes, where the evidence base is zero, there are no victims. However, you have permission to arrest me, as Somali pirates took a ransom, which paid my comrades. Now they coveted my property, not left alone and a cellar. You know, pirates without rum can not live. And I have 20-30 bottles of rum,” said he.

Dobkin says that neither he nor his family has no land on the territory of Kharkov, so he does not know that arrested the court. To the question, the court arrested all the property, Dobkin said: “I still Have conservation, there are bikes, there are two kidneys”.

“I consider myself in this matter to victims because they have me from time to time something is taken: the machine, the cellar, the house. Stole my friends money,” he said, promising investigators quick response.

Recall, 29 June the attorney General Lutsenko has submitted a petition to the Verkhovna Rada on granting consent to criminal prosecution, detention and arrest Dobkin. The GPU in the actions of the Deputy saw signs of deliberate arrangement by group of persons for abuse of official position and the promotion of fraud for the purpose of acquiring 78 acres of land Kharkiv regulatory cost of more than 220 million UAH.

13 July, the Verkhovna Rada at its evening session gave consent to criminal prosecution, detention and arrest of people’s Deputy Mykhailo Dobkin. For the removal of his immunity voted 288 deputies from 339 present, it was enough and thus the Parliament has consented to the prosecution of this MP.

14 Jul Dobkin questioned in the investigation Department of the gpou.

On 15 July the court ruled to satisfy the petition of the Prosecutor General of Ukraine Mikhail Dobkin taking into custody. This leaves the possibility of making a bail of 50 million UAH. If within five days for Dobkin will not bail him out, take him under arrest, which will last until September 14.