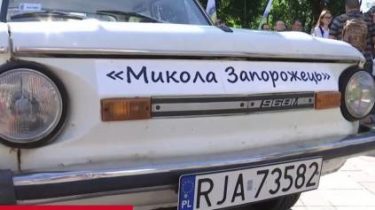 All drivers who drive on the European rooms in excess of the statutory period, will pay thousands of fines. This threatens the fiscal service, and already have the first precedent, says the story TSN.19:30.

Mode “transit” allows Dmitry to legally drive Ukrainian roads from 5 to 10 days, and he rides a BMW with Lithuanian registration for six months. For this he faces a fine of 8.5 thousand UAH, but the man knows, if he was stopped by the police – to do nothing she could. “The police have no right to prescribe for the violation, it is entitled to only customs officers,” he explains and adds that the offender does not consider himself, say, cars in Europe are cheaper than in Ukraine.

Its a car in Europe is worth 3 thousand euros, the same with Ukrainian numbers – at least 9. Officials are ready to strike their creativity by the ingenuity of drivers. “A member of one of customs of just hailing a taxi at these numbers and the Protocol. It comes down to it, this is no joke,” recognized officials. Despite limited access to the drivers that drive the numbers of the European registration, Fiscals they are predicting a bad dream in unpaid duties and taxes. “Everyone should understand: you may not immediately find and bring to justice, but we cannot use an illegal car and think that’s all right” – warn Fiscals.

Exact figures of how many drivers he travels in foreign rooms, no. Community organizations talking about half a million, official sources modest – 400 thousand. But problems with foreign numbers, becoming more and more. For example, to find the driver on the car with the license plates of Poland, Lithuania or Germany, that crashed and disappeared – almost impossible. The number of high-profile accidents have shown that law enforcement officers in such cases helpless.